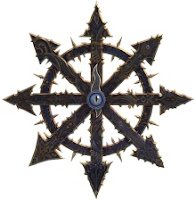 Last night I played my first warhammer 40k game with my daemons of chaos and want to share my initial impressions.  I am still learning the new rules and made several rookie mistakes, For the first three turns I forgot my Pinkies has Assault 3 weapons and was only rolling for one attack and Wound... Oops.

My first impression was "Wow Daemons suck in 40k."  This was primarily due to half my army not showing up until turn 4 and Space marine rapid fire decimating my pinkies.  On deep thought had I not screwed up the shooting I most likely would have destroyed those five man tactical squads.  There is some potential here...


So lets look at the Pink Horrors.

These troops add a rare aspect to the Daemons army, Shooters, but with such a low BS they need 4+ to hit.  Now heres the catch, even when you add the Bolt of Tzeentch to the unit giving you a tank buster ranged attack, you can move and shoot, even with the bolt.  This means you can Dance with marines and keep them in your range but out of range of rapid fire attacks.  They are also a fantastic unit for taking and holding objectives, Move them in take advantage of their 4+ invulnerable save and high rate of fire to keep the objective.  These pink devils are a highly mobile shooty troop with the advantage of having a S8 AP1 Assault 1 24" upgrade.

The instrument of chaos is only useful if they get into close combat and you should try your best to avoid this.

The Icon of chaos however is useful for targeted deepstrikes allowing you to not scatter if your troops enter play within six inches of the Icon.

In summery if you want shooters the pink horrors will give it to you, just keep them away from rapid fire attacks and out of close combat.

Next Bloodletters of Khorne.
Posted by Charles

Wispers on the warp