Hello All,
I have been playing warhammer for almost 10 years now, one thing I find myself doing is constantly flipping pages for the rules of units or Special characters.  Well I have had enough and decided to try and make stat cards.  Here is the first for my Dragon warriors HQ, Lord Nihilan.  The program I am using is Magic Set Editor, and is designed for magic cards.  I have not had the time to hammer out a set of templates but if I get to them I will host them for downloads.
Posted by Charles 1 comment: 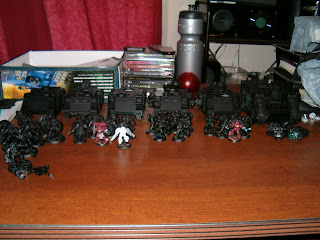 Small post today, heres a group shot of my fully primed Dragon Warriors army.  Next comes base coat with the air brush and then assembly line detail work, highlighting, layering, special effects.  All in an attempt to get the entire army 3 colour ready for Nov 19th, maybe if I'm lucky I will have a good chunk fully finished.

Posted by Charles No comments:

Hot Panda Give away

Hey Folks, HotPanda is hosting a give away over at his blog.  You can find it here. http://thechaosmanifesto.blogspot.com/2011/10/100-post-by-me-and-give-away-from-me.html
Posted by Charles 1 comment: 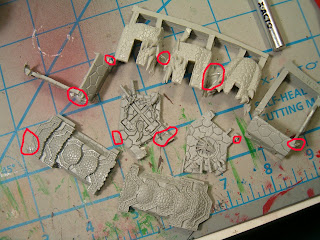 Well I broke down and bought a Salamanders kit for the Land Raider from Chapter house Studios.  I thought I would share my thoughts on the product.

First off the image to the left is what I received, upon opening the box I was impressed with the packaging.  It was solid and well packed, the resin parts where neatly tucked away in a sealed bubble wrap bag.

Now here comes the bad review, which I will break down into parts.

Shopping: If you have ever been to their website it is a pickle to navigate, the purchasing was painless.
Shipping: I'm dissapointed here, it took almost twenty days to arrive.  This could be a customs, USPS, or CPS issue, I'm not going to hold it against chapter house here.
The Product: Now if you look at the picture above, you should see all the nice red circles.  Each circle is a defect, either excess flashing, a mold defect or a thin point in the resin.  The detail however is good, It is just going to require a lot of work to clean it up repair parts and and attach them to the Land Raider.

Overall I'm skeptical if I will buy from them again.  This is just my opinion, take it as you will.
Posted by Charles 4 comments:

Email ThisBlogThis!Share to TwitterShare to FacebookShare to Pinterest
Labels: Reviews

So in my local league and interesting discussion has come up.  When can a deep striking unit Combat squad?

Looking at the Space marine Codex the Rule states "The decision to split a unit into combat squads, as well as which models go into each squad, must be made when the unit is deployed.  Both combat squads can be deployed in separate locations."  The exception being a drop pod.

Looking at these if we use Meaning A as the definition for Deployment then a unit can combat squad and still deep strike into two separate locations.  Using Meaning B as a reference then we essentially use the rules for drop pods.  The unit deep strikes as one unit and splits into combat squads after determining the deep strike location.

As a marine player I am personally fond of Meaning A for deployment, as it allows combat squads to deep strike into separate locations and allows the Marine player more flexibility.

The alternative is to simply define combat squads at the start of the game, make use of the "Treated as separate units" rule and deep strike them individually.
Posted by Charles No comments: 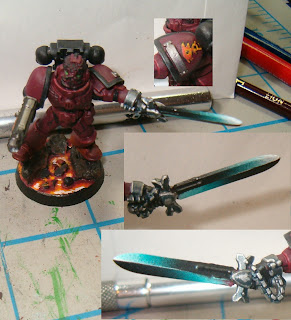 Hello folks,
I thought I would share some progress with you.  I have been trying to hammer out the green stuff work on my marines (More pictures will follow soon, I promise) and part of that plan was to do a raised Dragon Warrior icon on the shoulder pads.  That plan got scraped after a week of trying to make it work, so Onto painting.

Here is my first painted Dragon warrior, the power weapon is air brushed, as is the base coat.  I need more practice air brushing but that will come in time.

Let me know what you think, I'm looking for ways to improve.

Hello all,
I picked up a bottle of this new product today, and so far I am impressed.  as its name says its Liquid Green stuff, retails here for $4.45 for a GW paint pot sized amount.  I tried it out tonight on a conversion I have been working on and have to say I love it.  If you have seams or small cracks in a model, say where two parts join, then this is your friend.

So here are some Pros and Cons
Cons:
Pros:
After a few attempts at using it, like all our tools, you get better at using it.  I find this stuff a wonder, and will be using it to seal seams in tanks, and joints in models.  I recommend you get a pot and try it out, even works with warmahordes (Just clean your resin first).

Wispers on the warp